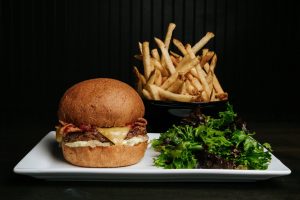 Find the Best Burgers in Durham at Burger Bach

No doubt there are a lot of burger joints near our luxury apartments in Durham, NC. So what makes Burger Bach so special?

ALL GREEN, NO GRAIN

First off, it's true. Burger Bach offers only 100% grass-fed, free-range beef and lamb, imported from New Zealand, on its menu. The chicken is from organic, cage-free ranches in the Shenandoah Valley. It's a commitment Burger Bach takes seriously.

WHAT’S WITH THE NAME?

The burger part is easy, Burger Bach offers burgers of beef, lamb, and chicken, as well as appetizers including oysters, shrimp, guacamole, and nachos. The sautéed steamed Prince Edward Island mussels and wild caught jumbo Argentinian Royal Red shrimp, well, we'll just use the expression, "are to die for!"

In New Zealand, the term "Bach" refers to a holiday home, a place where friends and family may choose to take a vacation. It is thought to have originated as a shortened term for a bachelor pad.

Burger Bach objects to be being called a burger joint, as it is so much more. It is a gastronomic public house, or Gastro Pub for short, welcoming visitors to stay a while, enjoying food and conversation.

The Durham location is the first in North Carolina, with other locations in Richmond, Glen Allen, Charlottesville, and Midlothian, Virginia. It has received numerous awards including 2017 and 2016's Best Burger and Best Fries, and 2017's Best Beer Selection according to Durham Magazine. The magazine also named it the Best New Restaurant in 2015.

Along with its extensive selection of local and national beers, Best Burger offers a substantial list of wines including a Sauvignon Blanc and a Pinot Noir from Allan Scott in New Zealand on tap, and New Zealand's sparkling Sophora.

When looking for a new eatery, we strongly suggest you try Burger Bach. And, when looking for a new one- or two-bedroom home near great places to eat, take a look at Station Nine. Schedule a tour and stop in at our coffee bar to see what makes this a great community to live in.

In the mood for a pint after your burger? Head to Hi-Wire Brewing for a pour of some locally-brewed goodness. Learn all about it here.